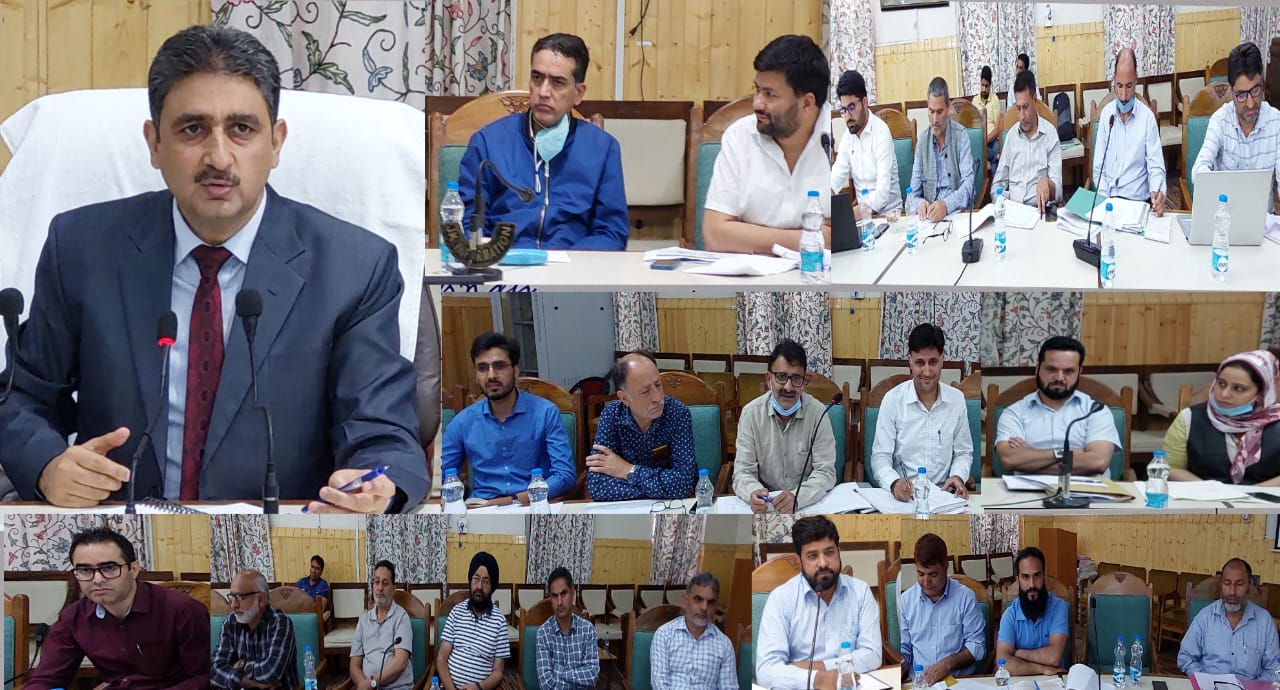 KUPWARA, MAY 19: The District Development Commissioner (DDC) Kupwara, Khalid Jahangir today stressed the need for greater coordination between sponsoring departments and financial institutions so that the beneficiaries do not face any inconvenience in settling their income generating units. He directed for nomination of Nodal Officers for maintaining mutual coordination between sponsoring agencies and banks.

The DDC was addressing a meeting of concerned officers and bankers, convened here today to review the progress of various self-employment generating departments.

The ADDC Kupwara, Altaf Ahmad Khan was present in the meeting.

The DDC directed the sponsoring departments to follow up their trainees till they get their units established adding that after getting proper training of any trade or craft, the beneficiaries should be linked with banks to get proper financing.

Calling Agriculture and allied sectors as backbone of our economy, the DDC said that it was high time to tap all possible resources to generate employment for our youth, especially for educated unemployed. He said our financing should be potential specific and asked concerned officers to encourage agro based units including dairy, sheep, walnut processing, Ripening, weaving, Handicrafts, wool processing, honey units, high density horticulture, grafted walnut, milk processing like units which have a good scope of income generation.

Referring to the need for motivation and guidance to unemployed youth, the DDC directed all concerned officers to make an integrated programme for mass awareness at ground level to educate youth about the schemes and programmes envisaged by the Government from time to time to generate employment. For this, he directed JD Planning to issue a calendar of activities for concerned officers.

Earlier, the DDC was briefed through PowerPoint presentation about various activities of these departments.

The DDC was informed that District Employment and Counselling Centre has approved 410 cases under MUMKIN scheme, of which 306 cases have been sponsored to banks for financing, out of which 97 cases were disbursed as on date who have received light motor commercial vehicles and started their business. Likewise, under TEJASWANI- the radiant scheme, 149 applications approved, 69 cases sponsored to banks of which 15 cases stands disbursed as on date.  Under Spurring Entrepreneurship Initiative, out of 213 applications received by the Employment Centre, 150 cases were approved by DLTFC.  Under Career Counselling scheme, 419 individual and 79 group counselling sessions were held during which 5091 candidates were counselled.

Under Horticulture sector, 130 kannal land were covered under high density plantation. The DDC asked concerned officer to increase the target of high density plantation for current financial year and make coverage of 10000 kannals. It was given out that Horticulture department has provided 32 power tractors, 34 tillers, 110 weeders, 110 motor power sprayers, 56 pack houses, 120 Vermi composite units and 5 deep bore wells to the beneficiaries.

The DDC while reviewing Agriculture, Sheep and Animal Husbandry departments, directed the concerned officers to work on fodder cultivation as it is prerequisite for sustainability of livestock during winters especially in hilly and mountainous areas. He was informed that the net sown area in the district under Agriculture is 42000 hectares and 30000 hectares under Horticulture.

While reviewing Animal Husbandry department, the DDC was informed that the District has 134000 tonnes of annual milk production which is exceeding the consumption of the district. The DDC directed the concern department to make efforts for establishment of milk processing units so that the extra daily use milk could be used in a better way.

Reviewing the Handicraft sector, the meeting was informed that 147 cases have been sponsored under Artisan Credit Card scheme, 95 were sanctioned out of which 74 have been disbursed. The DDC asked concerned officers to increase the target for the current financial year. He further asked the concerned officer to make units viable while taking cluster approach for which he asked him to make DPR for financial support.

Reviewing the progress of Jan Shikhsa Sansthan (JSS) project, the DDC directed its head to submit the list of centres along with beneficiaries and trainers and other requisite information to ADDC Kupwara for verification.

Among others ACP, CAO, CHO, LDM, DIO and other concerned officers attended the meeting.