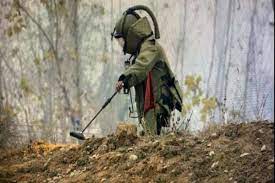 A 10 KG improvised explosive device (IED) was defused by the bomb disposal squad in north Kashmir’s Bandipora district on Saturday.

A senior police officer told news agency that the IED was detected by the police and armies of 14 RR in an Orchard in Bagh area.

They said bomb disposal squad teams of the Army and police reached at the spot and defused it without any demage.

Meanwhile a case has been registered and further investigations taken up in this regard.